Letoya Johnston, initially male, who changed his gender to female now claims she is broke.

According to a long Instagram post on her timeline. Letoya admits she is from a humble background and would love her fans to know that

“As a child I never grew up with so much. While growing up, I never had much either. I have never in my life been a millionaire neither have I spent millions of money to change to become a woman.

It is so unfortunate that I was NEVER BORN A WOMAN. I was born A MAN. ( HE, HIM, HIS, SIR) .I just feel like one and for that reason I do believe I am a woman.
I am not here to confuse people or make them believe that I have so much money. That is not true my people. I am broke. I am just surviving. Don’t mistake my life style with riches. It is not true. Sometimes I honestly go without food in this Nairobi.
I know most of you see me around top celebrities, flying and dining and running around those those beautiful hotels and amazing kitchens.

Some celebrities sometimes doesn’t pay you the money after you have worked for them. It is just because I keep quiet . PEACE is better than war.
For those hotels, it is work that takes me there.

I am a millennial and so I will take beautiful pictures and videos to make my Instagram look good. It’s just for memories of places I have been to because of my work.

I am not here to lie to the youths. I am here for pure honesty. If you are a person who receives things from celebrities for free, they will use it against you during a disagreement.

I learned this the hard way.! I decided to never let someone else’s riches, fame, status in life, wealth or standards interfere with my own life. I know who I am.
I must start by being honest with myself before I lie to the mass out here. I am extremely broke. I don’t have money and my bank account is closed down. I am surviving from hand to mouth. Just like any other poor Kenyan In the village.

You see this picture here, that is how my house looks like. It is my home. It is what I show off on social media. This is what I am proud of. Things will change I know but before that, this is the current situation. It humbles me to tell my thousands of followers who I truly am.

Let us all keep working hard young generation . It is through hard work that we move out from conditions that I am in right now.
Xo Xo
Toy Toy baby – Love. “

Related Topics:
Up Next

Authorities in Nyamira County are investigating an incident where a KCSE Chemistry paper is alleged to have leaked to students at Nyamira secondary school.

The private center has eight students. Reports from the ministry of education have hinted that only one student, out of the eight is ‘safe’ as they were not directly/indirectly linked to the scheme.

One of the students is alleged to have received the exam questions through WhatsApp and later shared them with fellow students in class.

Authorities have since arrested the principal of Kiabiraa Secondary School, the exam supervisor, invigilators, and Chemistry teachers at the same school.

It was 2002, Maasai elders attacked and cursed Peter Lakanai after he thwarted their attempts to marry off a teenage girl to a man in Tanzania. However, 19 years later, the Endashiata Primary school teacher (Kajiado West) is still going strong, teaming up with other like-minded individuals to stop the vice.

According to Mr. Lakanai, elders from both ends had reached an agreement which would see the class seven girl (then) drop from school, undergo Female Genital Mutilation (FGM), and later join her rich to be husband in Tanzania.

“I took the lady to Kajiado Seventh Day Adventist (SDA) church where she completed her studies and got married at the right age,” recalls teacher Lakanai, who was recently awarded by the county government of Kajiado for rescuing girls from early marriages and FGM.

Nonetheless, Lakanai is afraid that he may not be able to rescue more girls soon if more resources are not available.

“We only have one rescue center for girls in this area. It is hard to help as many girls as I would have imagined because Kajiado SDA rescue center is at times overwhelmed” he added.

In a community where men are the custodians of culture, it is seemingly hard to break certain barriers without involving them. A section of the men from the Maasai community is at the forefront to ensure FGM is a thing of the past. Last year, led by the middle-aged teacher, the group – comprising of close to twenty men – decided that they would join efforts in eradicating FGM in Kajiado County.

Data from UNICEF shows close to four million women in Kenya have undergone the cut depicting the sad state of affairs in 9 Kenyan counties, Kajiado being one of them.

With threats like excessive bleeding, urinary and menstrual problems together with increased risk of childbirth to women who have undergone female genital mutilation, men like Lomoyan Oletongoi have vowed never to allow his three girls experience what women in his community underwent back then.

Under normal circumstances in the Maasai culture, his eldest daughter who is now 9 years old would be a few years away to undergo the cut and off to marriage. That is not going to happen.

“FGM was a rite of passage to adulthood in our community. The father to the daughter was ready to receive bride price when his girl healed,” alludes Lomoyan.

The area assistant chief Paul Kariangei says that most of the men heavily depended on bride price after marring off their children (daughters) who had passed through FGM.

“There is high poverty in this area, it is high time stakeholders walked in to give alternatives like business opportunities to these men who have shown willingness to embrace the new normal,” said Kariangei.

Moreover, some fears that neighboring Maasais from Tanzania, which borders Torosei four kilometers away, might still be embracing the culture leaves locals dejected.

This is likely to affect efforts in Kenya as some families are secretly letting go of their daughters to men on the other side of the border.

Assistant chief Kariangei however downplayed these claims arguing that the only business with their colleagues in Tanzania is the selling of livestock.

With Kenya joining the world in marking International Day of Zero Tolerance for Female Genital Mutilation today, the only hope for men like Kariangei, Lomoyan, and Lakanai is that more men would join them in fighting the culture which has coasted lives for ladies in their community.

Today Kemsa wants to tell us there were no orders, due process was followed. Even Sanitization needs some Good Table Manners… Then you have started firing People who DID NOT EAT” Itumbi Lamented on twitter 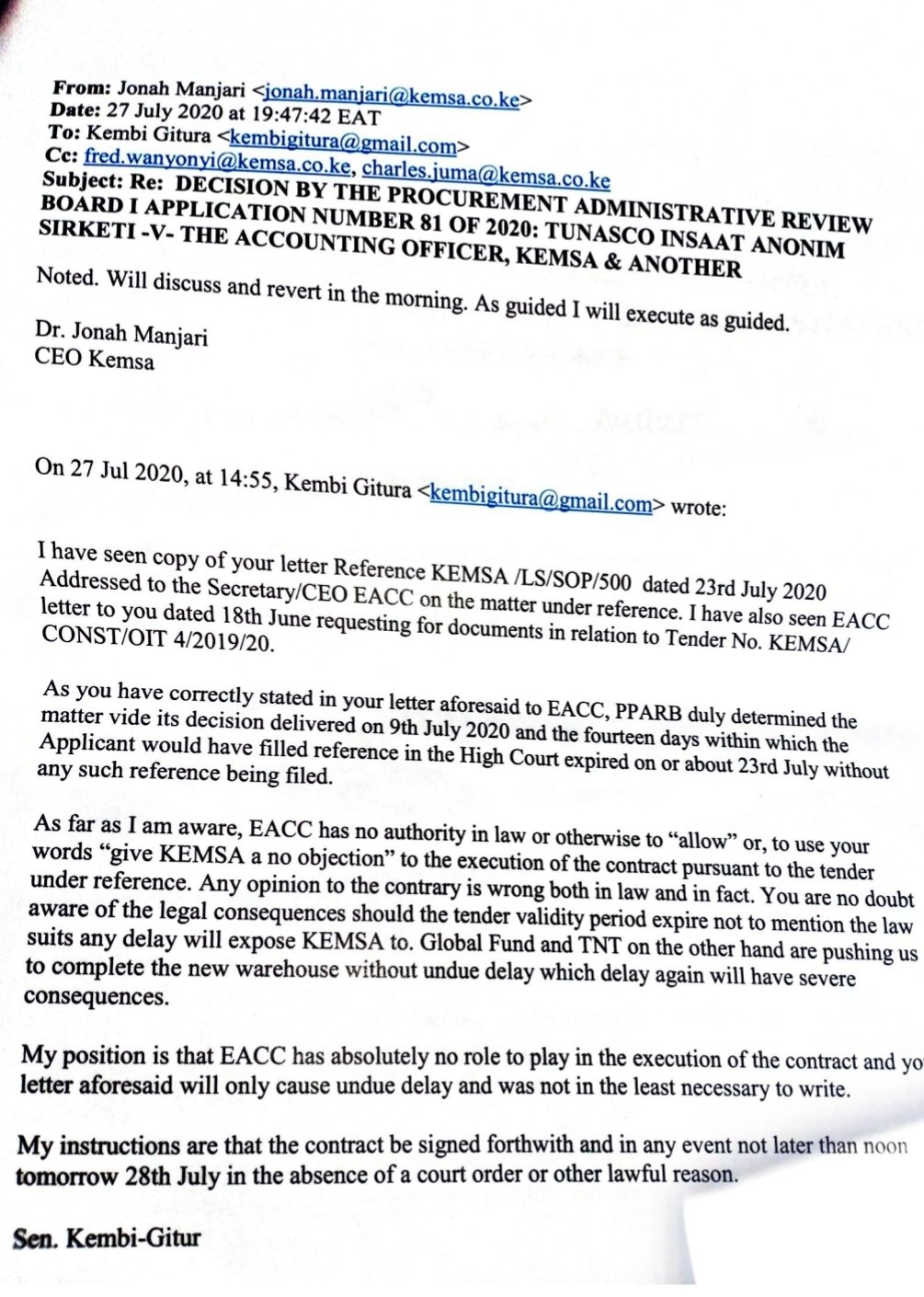 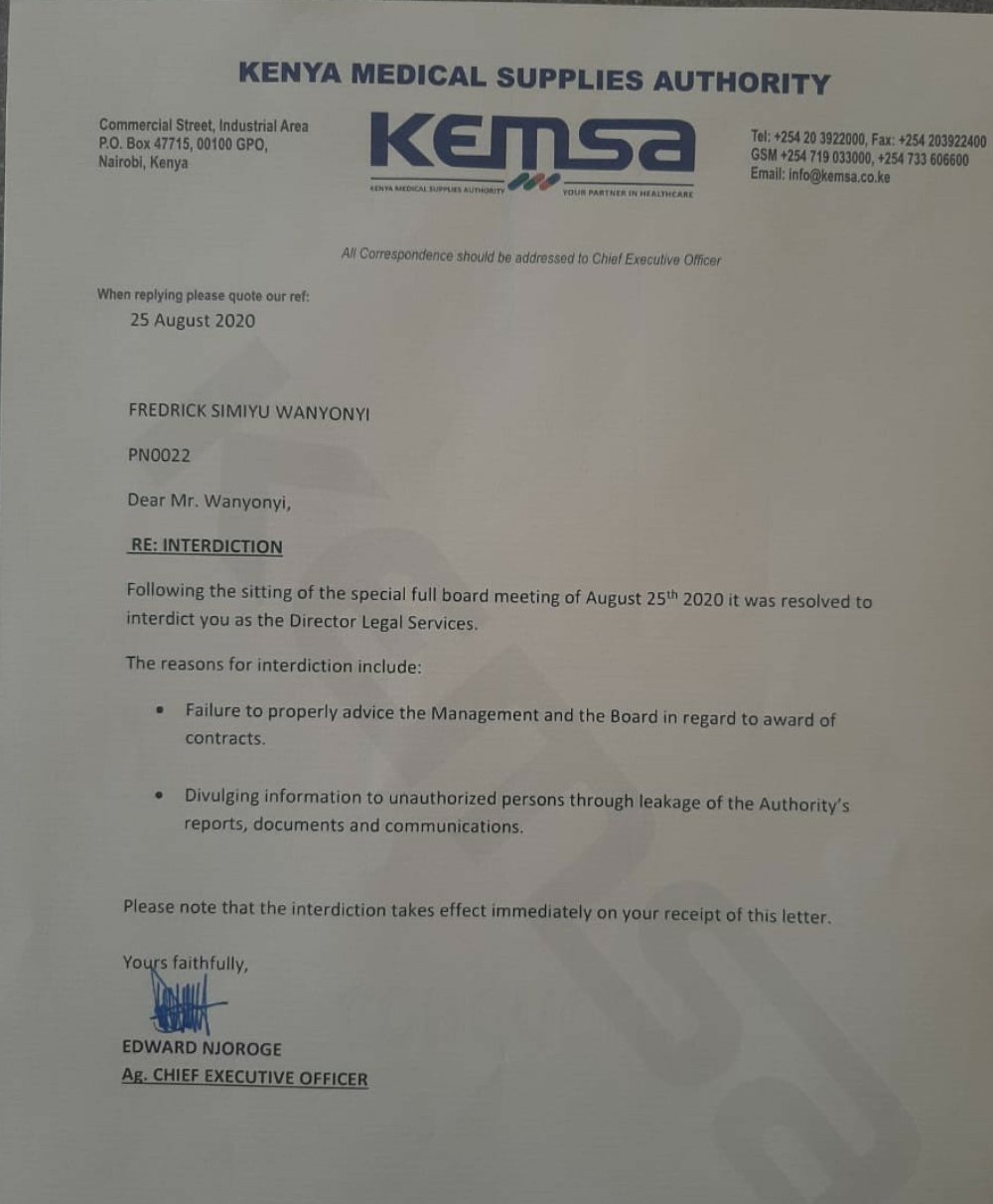