When it’s February you know it’s a dry season in Atemo. Women and children of all ages strip naked at the river to cool their skins from the stress of the burning sun. Adolescent boys passing through the narrow missionary-built bridge, peep, from an angle of depression, requesting for a quickie.

When the gathering romance has been challenged and dirt left to flow downstream, the curvy women balance buckets of water and laundry and utensils on their heads as they ascend the hillocks. All the while, the preying boys are strategically positioned to escort the heavy-ladened ‘comrades’ from the river. That’s when you learn the romance, though challenged, had only built momentum.

Upon arriving home, clearly with no-one else, a bucket is for shower by the he of the house. As the old adage goes, he who gets a wife gets a good thing. Wife ferries water to the bathroom which is behind the house, husband appreciates, and love multiplies in the house! Darkness comes and the next programme on TV is ‘not for general viewing’. Children must sleep now! Hope is that rain shall come in March if the Metrological department is to be trusted.

This is the exact story of water and life in Atemo village, somewhere in the heart of Kabondo-Kasipul constituency. River Awach which flows from Nyamira County, runs through Atemo and downstream into Lake Victoria. Adjacent to the curvy river bankof Awach is Atemo Water Treatment Plant by Lake Victoria South Water Services Board (LVSWSB), also under care of Homabay County Water and Sanitation Company (HCWSC). The plant is the source of clean-treated-piped water that has been supplying Oyugis town since 1970s.

Apart from pipes laid by Lutheran Missionaries to convey borehole water to Atemo Primary, Atemo Secondary and the Missionary base, LVSWS ferries all of Atemo’s valuable resource to Kasipul (Oyugis), a totally different constituency. But now residents and leaders have come out furious over the matter, stressing how it’s not practical that their women have been fetching untreated water yet their water is ‘taken to other people’.

Speaking at a chief’s Baraza during a past event, Kojwach Ward MCA Joan Ogada called upon residents to speak up and be heard.

“Our people struggle to get water yet other people are enjoying our water in Oyugis, impossible,” Ogada, who spoke in dholuo, charged amidst cheers by residents.

Kojwach East Chief James Oindi also said: “It will only be fair if locals are considered for the supply first.” Area MP Eve Obara, who spoke on a vernacular radio station recently, also expressed her disgust over the matter. “It’s time the matter is re-looked proper and water conveyed to my constituents before anyone else,” she remarked.

According to an officer at the HCWSC, who requested anonymity , a Chinese Company has been hired by the Rift Valley Water Services Board (RVWSB), that did the “contractual logistics”, not LVSWS, which Atemo Plant falls under, to rehabilitate the Atemo plant and construct a new project altogether.

Communication from the office of Homabay Governor Cyprian Awiti reveals that the African Development Bank funded Oyugis water supply project  in a tune of sh750 million and work is soon beginning. An unofficial source has it that the work is to begin today, Wednesday 20th February 2019, whereas another has it the work is to commence officially in March 2019.

A number of Kojwach Ward residents, who spoke to this reporter, have vowed to come out and frustrate the Chinese come the start of the project; if it won’t be clear that the project is to supply them first. An early signal that the construction work might stall before commencement.

Apart from Ober Schools and a few homes, which lie along the main conveyance pipe, the rest have all along been ‘salivating observers’, in the affairs of Oyugis. Other public institutions in the region include Ringa Boys High, Dudi Girls High and God-Ber Secondary, which rely heavily on scarce borehole water.

According to the source at HCWSC, they are yet to see the Bill of Quantity (BQ) and the tender documents, so as to know the exact scope of work. Our attempts to get the information from RVWSB also proved futile.

Chased with a panga

Collins Oredo, one of the managers at Atemo Treatment Plant, however differs with the residents; especially the immediate neighbours to the facility, whom he says are very difficult to help.

“It’s astonishing that the villagers now want water. In 2017, youths attacked and vandalized a water kiosk which was serving them without charge. They demolished everything and refused to cooperate,” explained Oredo, who also recalled how youths chased him with a panga because he was a ‘stranger meddling in their business.’

Oredo, who hails from Mbita, had been transferred by LVSWSB to manage the facility in 2017.

Atemo village is outstanding for its serenity due to the numerous trees that occupy private land. Making it no secret that the residents have contributed heavily in making the region a water catchment zone.

This reporter met Ogweno, a youthful resident who had gone watering animals in Awach when he remarked:

“Mon moko beyo adier. Kawabiroka to wan gitabu kaka chuo. Ingéyoni kisegombo chi ngáto kata nyar ngato, nikech ineno iwe, chuno nyakachieng’ moro ilidhi miterri kode.” (Some women are real beauties. Us men we have trouble passing here. After developing lust for somebody’s wife or daughter, because you’ve seen her nakedness, it is a must you tip-toes and sleep with her).

He confirmed having hit the cookie jars of two ‘comrades’ whom he had seduced at Awach. And that, of present, he repeats the act with the same women, at their hidden place, so long as he desires, because he says the two comrades tells him ‘he does it better’ than their husbands.

High HIV/AIDS prevalence in the county has for a long time been attributed to “sex for fish” business along the shores of Lake Victoria. However, there is no fish in Awach. But women and men who depend on it have multiple sexual partners, if Ogweno’s confession is to go by. According to Edward Oremo, the County Beach Management Chairman, who spoke to The Star in 2018, women who trade in fish “engage in unprotected sex with fishermen in the bush near the lake, after which they take a bath.”

The HIV/AIDs prevalence rate for Homa Bay county stands at 20.7 per cent, according to the latest National Aids Control Council report.

Meanwhile, it’s against the public health policies, world over, to bath in rivers, as it does not only kill aquatic life but also aid in the spread of waterborne diseases such as cholera, diarrhea, bilharzia and typhoid.

I will come and open my legs on your shows, don’t call me again!, Akothee to media houses

A form three student of Nyang’ori High School in Vihiga county has reportedly killed a security officer in the school using a sharp-pointed stick.

A source privy to the ongoings at the school has told 47 reporters that there is panic at the school with normal learning Interrupted.

The student reportedly attacked and wounded the guard last night. He was later pronounced dead at a nearby hospital (name withheld)

According to the source, the student was making noise in the dormitory and refused to heed his colleagues’ request for him to keep quiet.

“He defied his colleagues’ plea and threatened to harm all of them, It is then that the guard came to intervene”

The indisciplined student attacked the guard, snatched his stick, broke it into two, and used the sharp end to spear his neck and eyes.

Local authorities moved swiftly only to find all ‘guests at the party’ had escaped after suspecting that the youths had set them up.

Af if warnings by the health ministry about the effects of locally brewed alcohol (Chang’aa) on humans are not enough, residents of Nyatieno village in Nyamira county were treated to a rude shock when over 200,000 liters of changa’aa was retrieved from the ground. 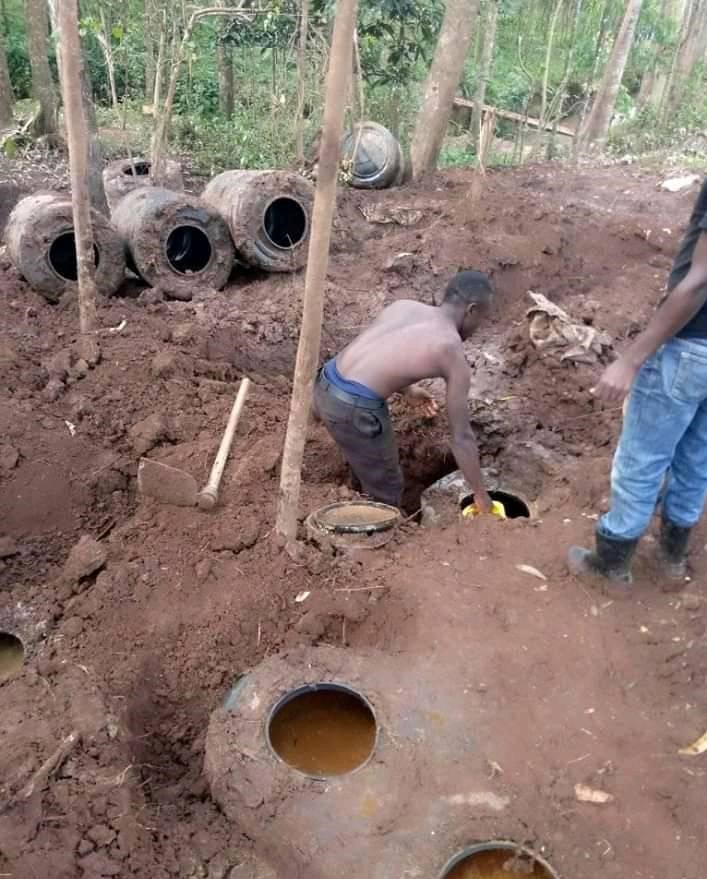 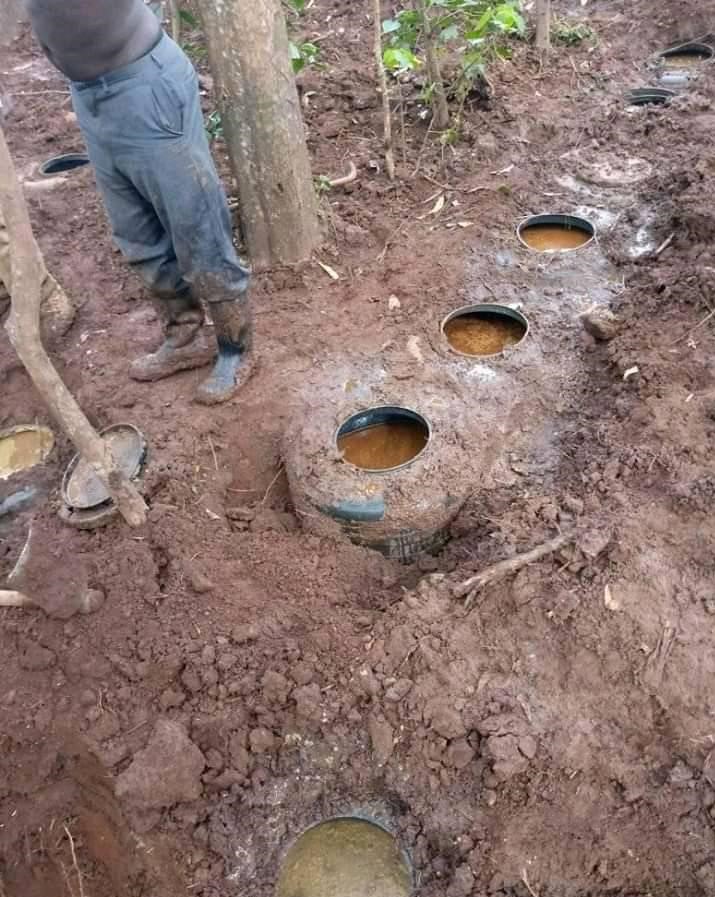 It is reported that the youths were dismayed by the sheer ignorance by which elderly people at the home displayed without following the social distance protocols.

Local authorities moved swiftly only to find all ‘guests at the party’ had escaped after suspecting that the youths had set them up.

“The residents are behaving as if covid19 is not in existence at all, the government needs to educate our people,” Said Kevin Onkwemwa, a youth in Nyamira while speaking with opera news through the phone.

Property worth millions of shillings has been destroyed after a fire razed down Modern Electricals shopping Kisumu Town.Modern Electricals  is a one-stop-shop for all domestic electrical appliances and equipment

Efforts by the Kisumu County government fire brigade team to put out the flames were delayed as the Kenya Power emergency team arrived on the scene two hours late.

Residents took to Twitter to blame the laxity by the officials in combating the spread of the fire.